The Main Attraction of the Horton Plains is World’s End. Is this True?

Do not get upset but there are many World’s End in Sri Lanka. This is only one of the World’s Ends.

Maybe Horton Plain Word’s End is one of the popular and most famous World’s End :-).

Anyway, this is about Horton Plain World’s End.

The honor of the Governor of Ceylon (1831-1837) Sir Robert Wilmot Horton. In the year 1969, Horton Plains has declared a nature reserve.

One of Sri Lanka’s most famous natural attractions, World’s End Horton Plains is a spectacular cliff face with a dramatic 900-meter drop.

In 1988, the reserve was elevated to the status of a National Park.

We kept our bags on the bench as we wanted to reduce the weight that was on.

I am not very sure about this story but it is also sometimes called “lovers leap” and according to legend, this was the place where two lovers Monica and Brito jumped to their death when their families objected to them being together.

I can NOT even imagine :-). Some people say Love is Blind 🙂

My wife told me that there is another “Lovers Leap” in Trincomalee, Sri Lanka. wow, Beautiful Beaches of Sri Lanka

you must be wondering what’s the deal with the World’s End Horton Plains(This is the main reason I went to see), mini or not.

What is this World’s End?

World’s End basically refers to the feature of this plateau where the edge fell in a straight drop manner to the valley.

Not gentle slopes there. It was as if the earth just collapsed in a vertical column. 🙂

At Mini World’s End the drop is not quite as pronounced, measuring nearly 300m, but at World’s End Horton Plains, just under 900m separates the standing edge and the solid ground below.

It’s a very long way down this impressive precipice.

I was looking at World’s End Horton Plains. I did not see anything as the fog was too thick

When we reached World’s End, the sun was shining overhead, the sky blue as it could be, and somehow the misty cloud covers that came and went,

This phenomenon of low cloud cover is common enough to earn national park the name of the cloud forest.

We were told that the panoramic and distant views are bound to get obscured by the mist from around 10 am onwards but we reached the world’s end at 10:30 AM.

As such an early morning arrival at the escarpment would stand in good stead. some people say, during the rainy months of May to July, the mist is particularly thick therefore if you plan to visit World’s End, then try to avoid May to July month.

Tell you frankly, we could not see the World’s End spectacular view properly duet mist but gather what type of view would have greeted us if there was no mist.

Difference between the valleys and the forests

On a fine day you can supposedly see the sea (several hundred miles away. Hmm, I can NOT believe but), but We’ve never had the luck to confirm that!. if you do, do let us know?

As I mentioned to you earlier, the work to the World end is a good 6km hike between forests and lush valleys.

The most fascinating was the massive temperature difference between the valleys and the forests. You can really feel the difference

The great temperature flux is attributed to the valleys heating and cooling rapidly, while the forests remain insulated from the extremes thus making them far cooler than the valleys but I love the valley view and the beauty than forests

It is just a forest but the valley greets you with its lush vegetation and scenery in which you carry these memories for life.

It needs to be mention that I really enjoyed the walk from Bakers Fall to World’s End. there are many things that you can capture.

Green grass at Horton Plains and a Part of Chimney Pool

When you come close to World’s End Horton Plains, you find the below-mentioned man-made bridge.

I guess, we have worked more than 6km at that time and we were a bit tired. we jumped in the water stream to wash our face.

A man-made bridge over a water pool

It was ice cold but that bit of water gave full of strength and refreshment to move forward.

Do not hesitate to wash and take a break at this place. We do not advise you to drink this Water under any circumstance. I am pretty sure, it is clean but not drinkable.

I was washing my face with the water. it was icy cold

My Best Advice. Take It or Leave It.

When you reach the world’s end, please remove all your bags and other stuff from your body and keep on the ground before looking at the World’s view.

It is a very beautiful and wonderful view but also very dangerous too. A lot of people have fallen from this precipice and never come back alive except one Forginer(Recent indecent)

Slightest imbalance in your body movement, there is a good chance to go over and never to come back therefore make sure, you remove everything from your body so that you have better control and balance of your body.

It is another Beauty and the Beast story 🙂

Just look at what we did. we kept everything on the ground.

If you are with your slippers, then remove that so that we have a better Grip.

If you go with your children, then you have to be extra careful. make sure your kids do not go very closer to the precipice side.

Do not try to take very good photographs. Your life is more worth than a photo that you try to take.

A lot of people reach the edge of the precipice to take a better view but I do not advise. Risk is too much.

I took every precaution before peeping into it. I could not see what I wanted but I told my self, this is good enough.

Mini World’s End the drop is not quite as pronounced. According to some of the facts, measuring nearly 300m. 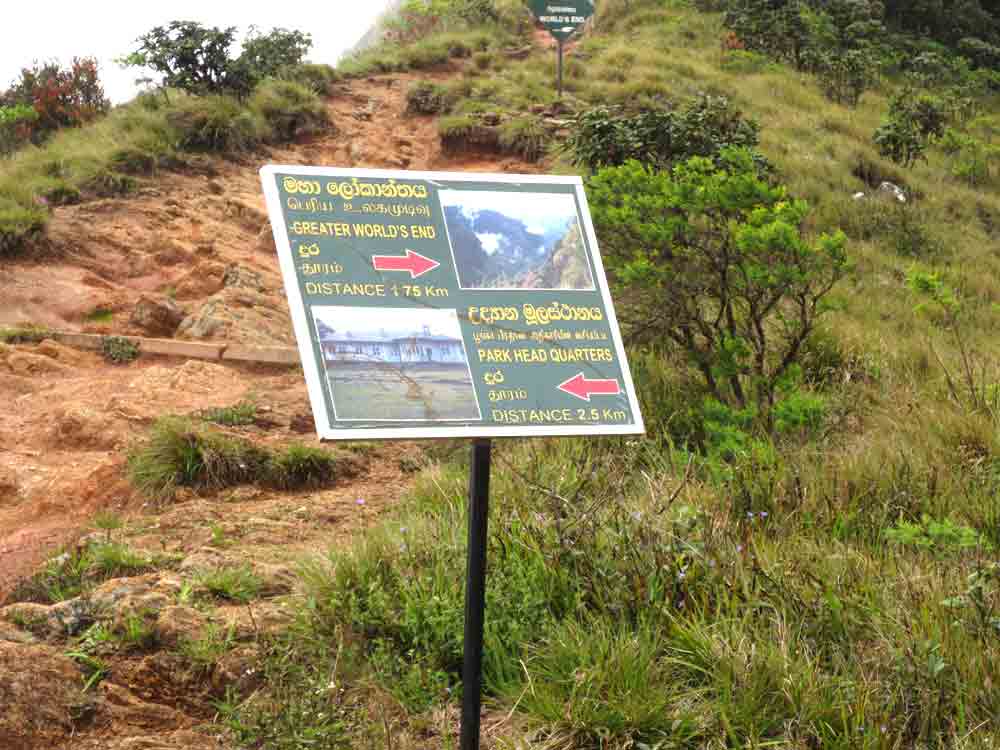 This is the safest way to watch the Mini World’s end.

Do not worry about your wearing and whether it will get dirty or not. Life is more worth than these clothes.

This is the most advisable way to watch the Mini World’s End. Just look at where our bags and how we peeped 🙂

This what you can see if you peep from Mini World’s end. 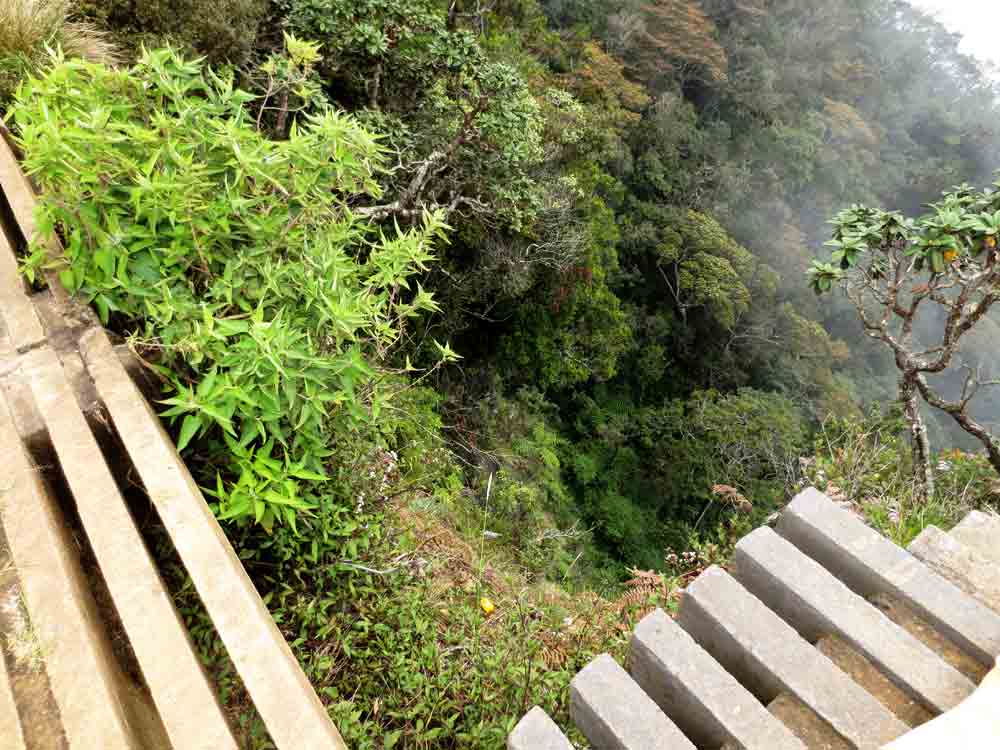 As mentioned to you, this the jungle of the Horton Plain. I did not take many photos in these areas as nothing much to see. it is just a thick jungle but I love the birds singing sound that you get when you work on this trail.

Horton Plain Jungle Which I did NOT enjoy

As I mentioned to you earlier, I have my own explanation for this type of vegetation that Horton Plain has.

If you carefully look at these trees, you do not mind much larger leaves and larger trees. These trees are short and compact. 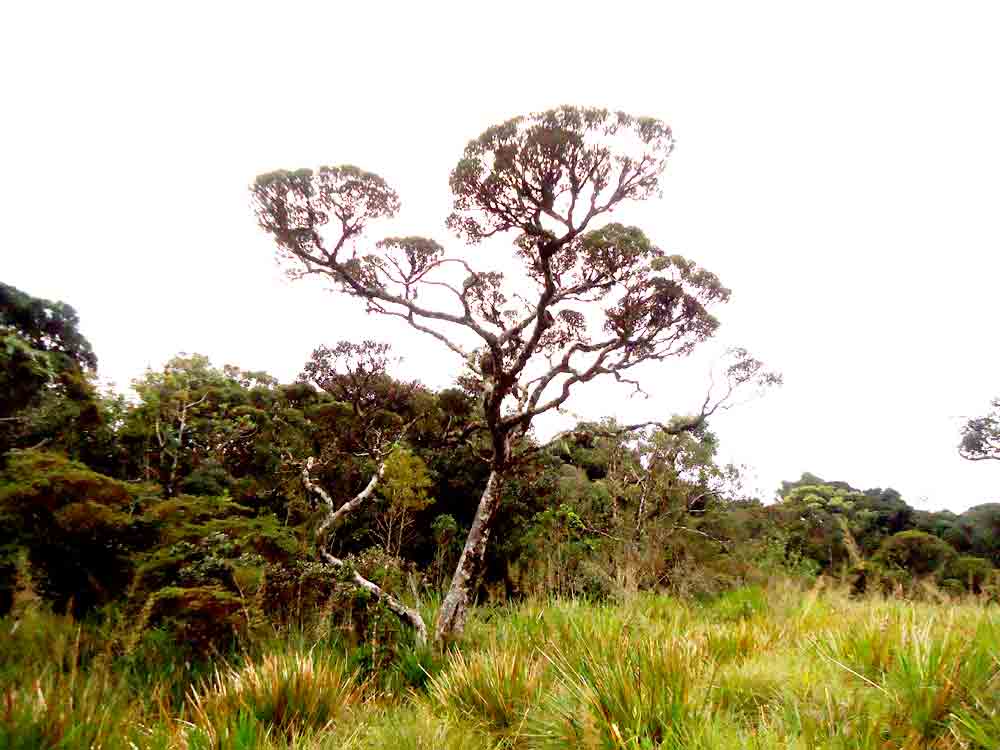 Look at these trees very carefully. I am not a good photographer. The below-mentioned photo came due to the limitation of my canon camera.

If you look at the trees, it has patterns and similarities. These trees do not grow higher. You can find these types of trees in the near-desert areas or some area where you find radiation. 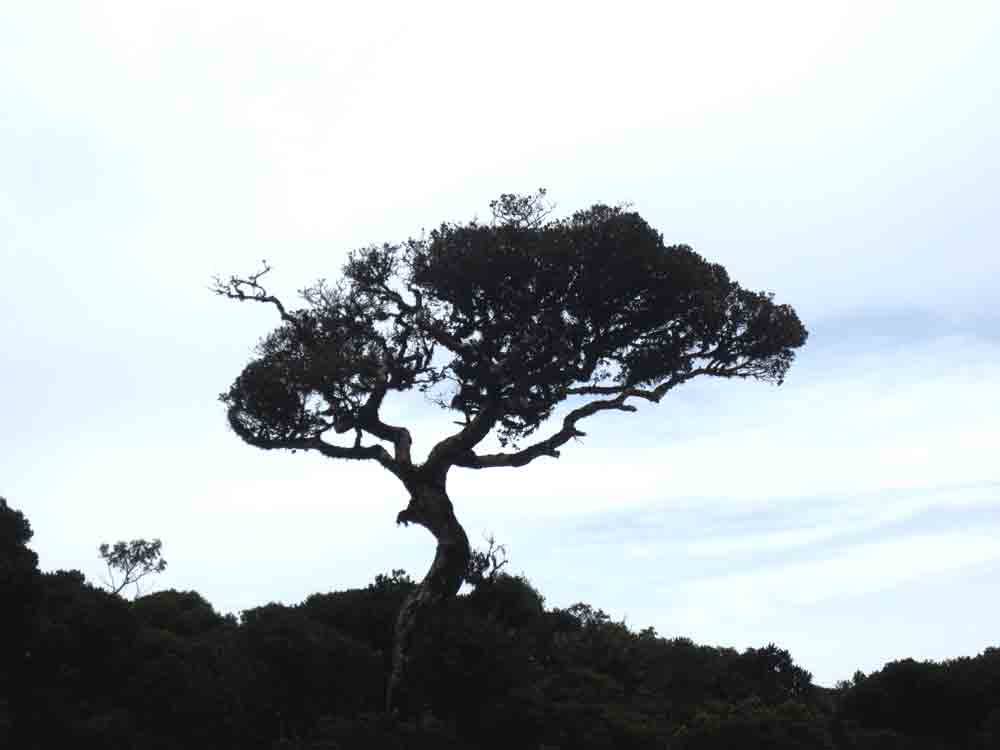