Our Journey to Diyaluma Falls

Diyaluma Falls is known as the second highest waterfall in Sri Lanka.  And the good thing about it is you can reach the top of the Diyaluma falls from the Poonagala Estate. 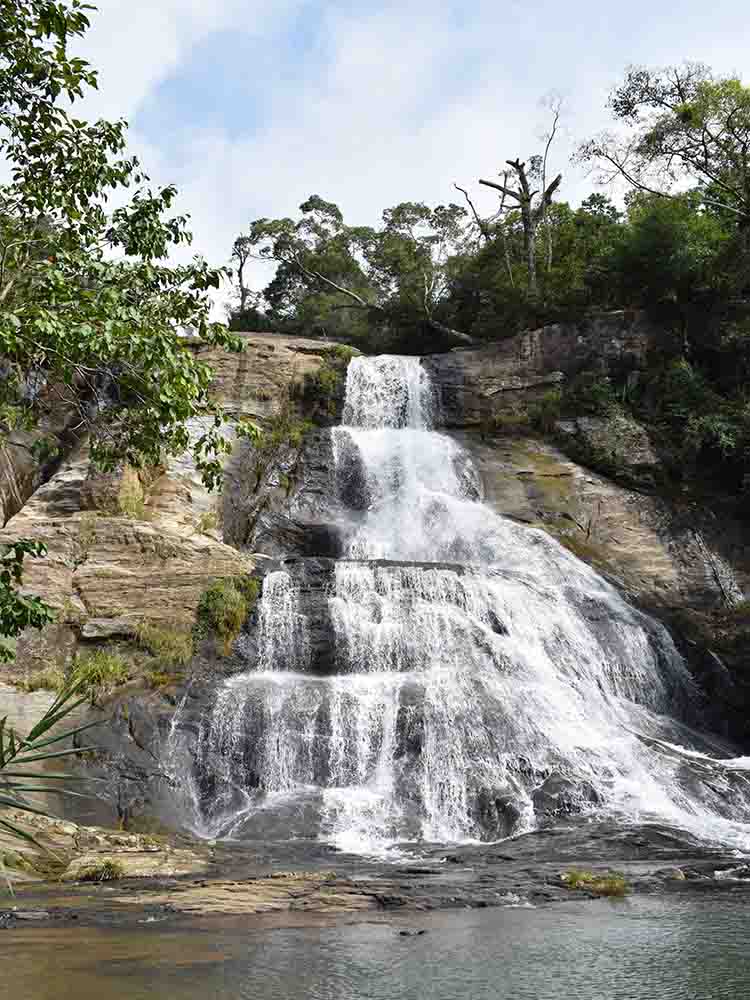 It is a bit far away from the viewpoint, yet a must-see if you are visiting that area.

A few weeks back, I was planning to go Badulla by the night mail train, just to escape from Colombo for a day. But when I asked one of my friends to join me, he suggested going Haputhale instead of Badulla.

So we got tickets to Badulla in case if we change our mind on the way. It was around 350LKR (2.5$ ) to Badulla, and luckily we could get seats next to each other.

The train started the journey from Fort around 8.15 PM. It’s a very familiar ride for us since we always visit upcountry in this night mail train more often. Even it is a long journey, we had enough stories and gossips to share all the way to Haputhale.

You can buy food and coffee on the way to from the sellers on the train. It was really good to have a hot coffee on the way while passing misty hills around 2 AM. After a long journey train reached Haputhale by 6.30 AM. 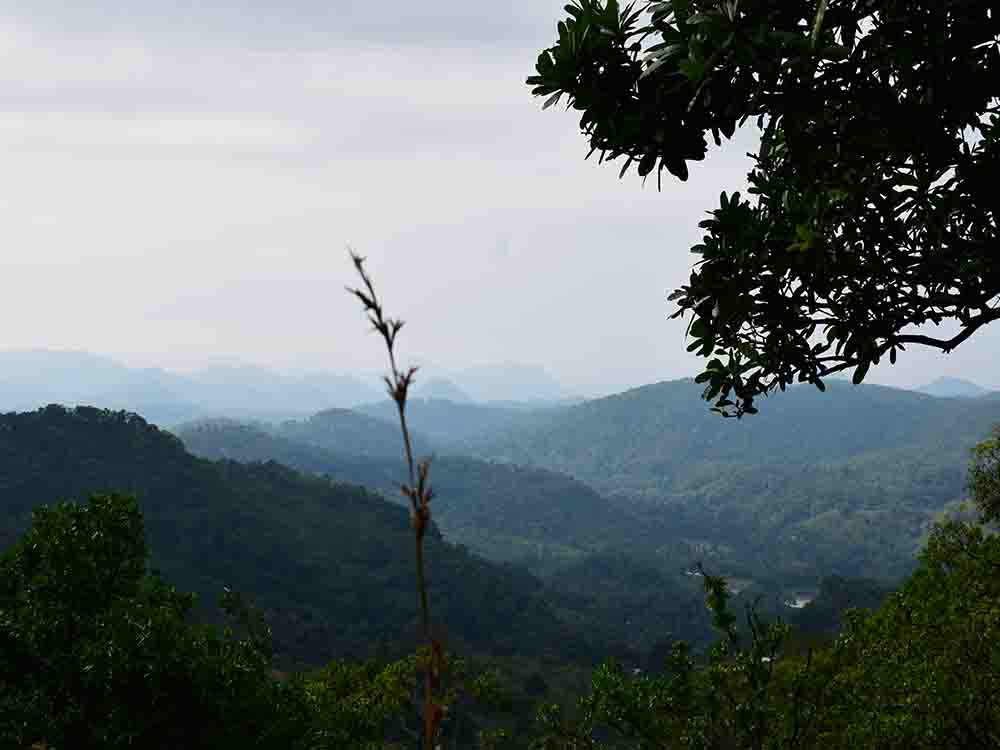 On our way to summit of Diyaluma Falls

It was bone freezing cold when we get down from the station. Even though we wanted to stay and rest a bit in the station, they didn’t allow us to stay for a long time in the station.

In Search of Diyaluma Falls

So we went to the bus stand of Haputhale to check is there any shop open by that time.

Luckily one small tea shop next to the bus stand was open at that time. We had our breakfast there, for a low price less than 150LKR. (1$).

It’s a Tamil shop that we call a “SaivarKade” in Sri Lanka. They had some great Wade and Dosai along with hot Masala Tea. Since we had no idea of the bus we had to get from Haputhale,

we talked to the shop owner. It was the Welllawaya bus we had to get from Haputhale.

After waiting for a bus for more than twenty minutes, we got the bus to Koslanda. To reach Diyaluma falls, we had to get down from Koslanda Junction and get a tuk-tuk from there. We asked the conductor to tell us the place that we have to get down.

There was an army soldier on the bus who has been there recently. So he joined the conversation and told us that we have to pay extra attention to the elephants. As per the villagers, there are few elephants roaming around the upper part of the waterfall. 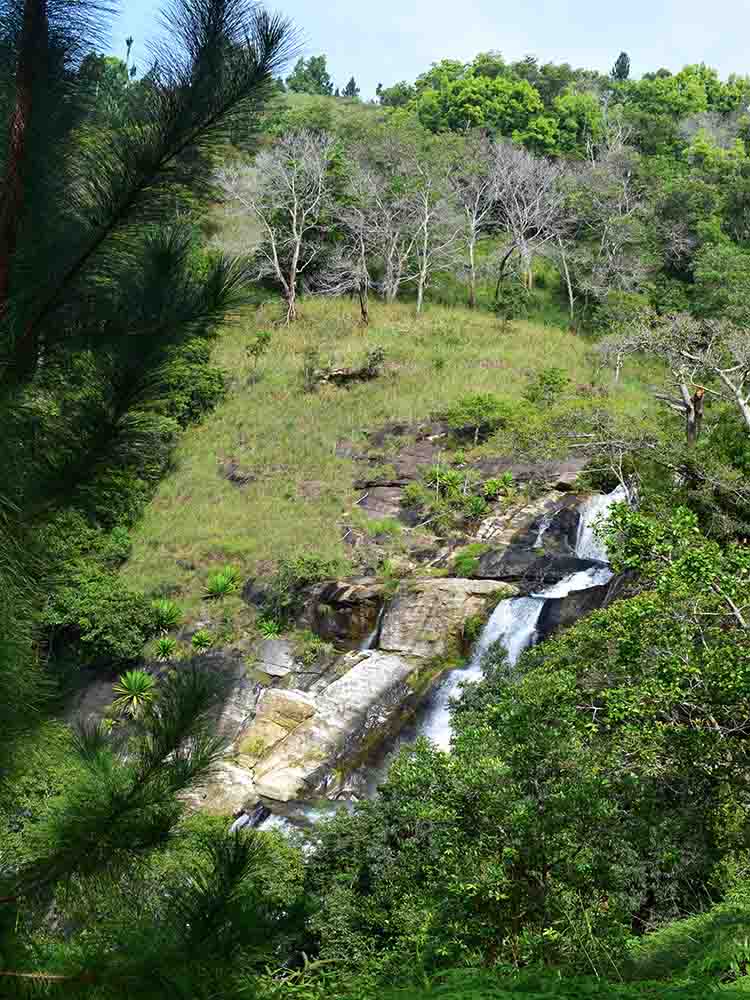 Upper Diyaluma Falls from a Distance

Within 30 minutes drive from Haputhale we arrived at the starting point of the trail, Koslanda Junction. You can’t miss this small town with a huge Bo tree next to the Poonagala Road.

It was just 300LKR (2 $) from the town to the estate gate. Also, there is a bus service to Poonagala to Koslanda, which is going only 3 times per day. 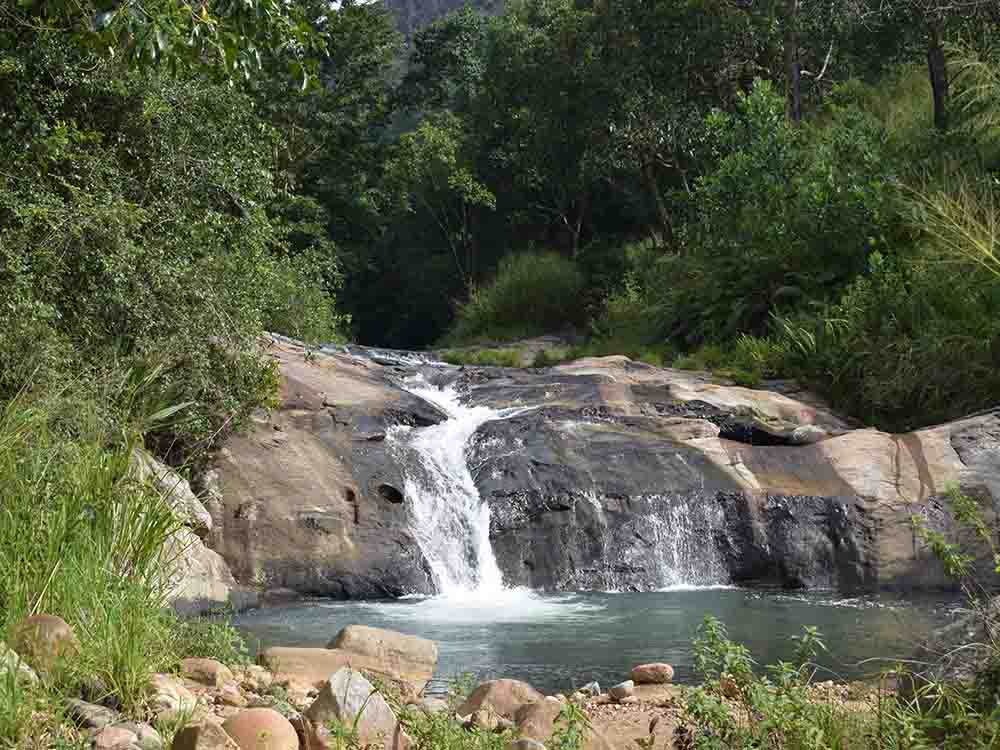 Footpath was clear for some distance across the Rubber estate. But it was getting harsh when you start climbing the sandy slippery rocks across long grassland.

Sharp leaves of grass were really annoying for us since we were not wearing long sleeves. So that is better to cover your body while on a hike like this.

After 45 minutes hike across the grass, we finally reach the top of the mountain. We could hear the noise of the waterfall from there, but no path was there. And already we found some Elephant dung, not more than two days.

Without thinking twice we followed the crushed grass areas to find the path of the Elephants. So we can easily find the way to the waterfall. Within around 30 minutes we found the top of the Upper Diyaluma

Falls. It’s known as a separate waterfall you meet before the main waterfall Diyaluma.

It was a fantastic view for us after a tiring hike to see some natural pools on the top of Upper Diyaluma falls. 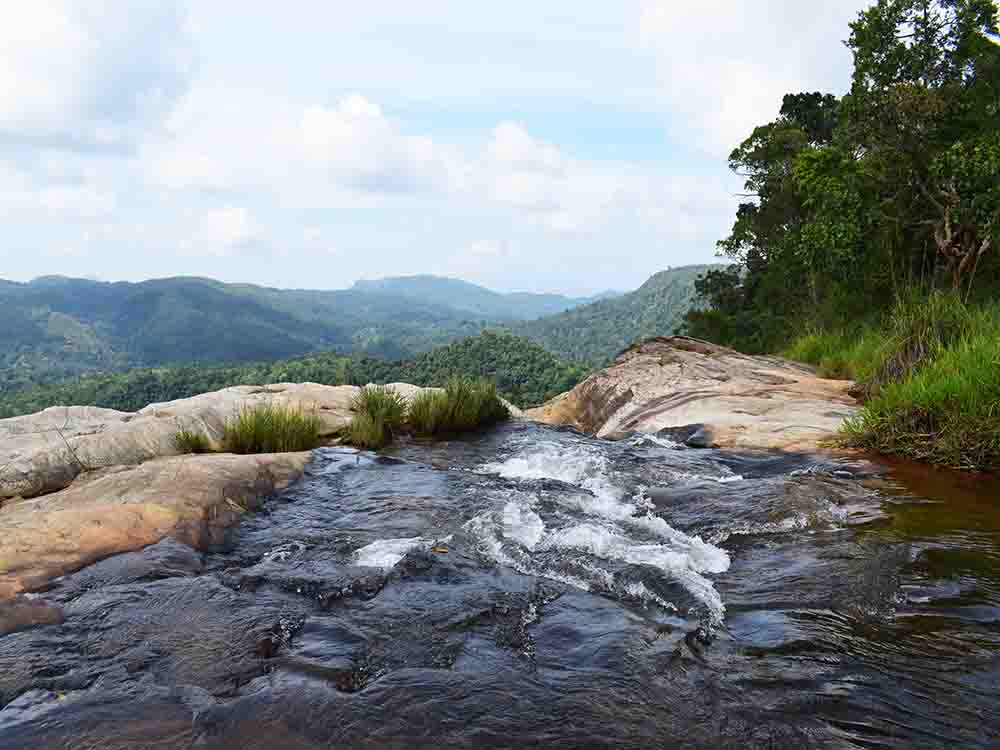 Another Image of on Top of Diyaluma Falls

My Personal Feeling of Diyaluma Waterfalls

I immediately got into a swimsuit and jumped into one of these shallow pools. After relaxing there for a few minutes, actually more than 30 minutes, we started to go down the water stream to the bottom part of Upper Diyaluma falls.

Honestly, that was the best waterfall I have seen in my life. It was so beautiful with seven cascades of clear water.

You will never get tired of watching this amazing waterfall. But we didn’t get into the bottom part pool without a proper idea of the deepness. From there you can see the top of the main waterfall, Diyaluma.

So we walked across the stream down, and sometimes we walked on the bank, and finally, we were on the top of the second-highest waterfall in Sri Lanka. 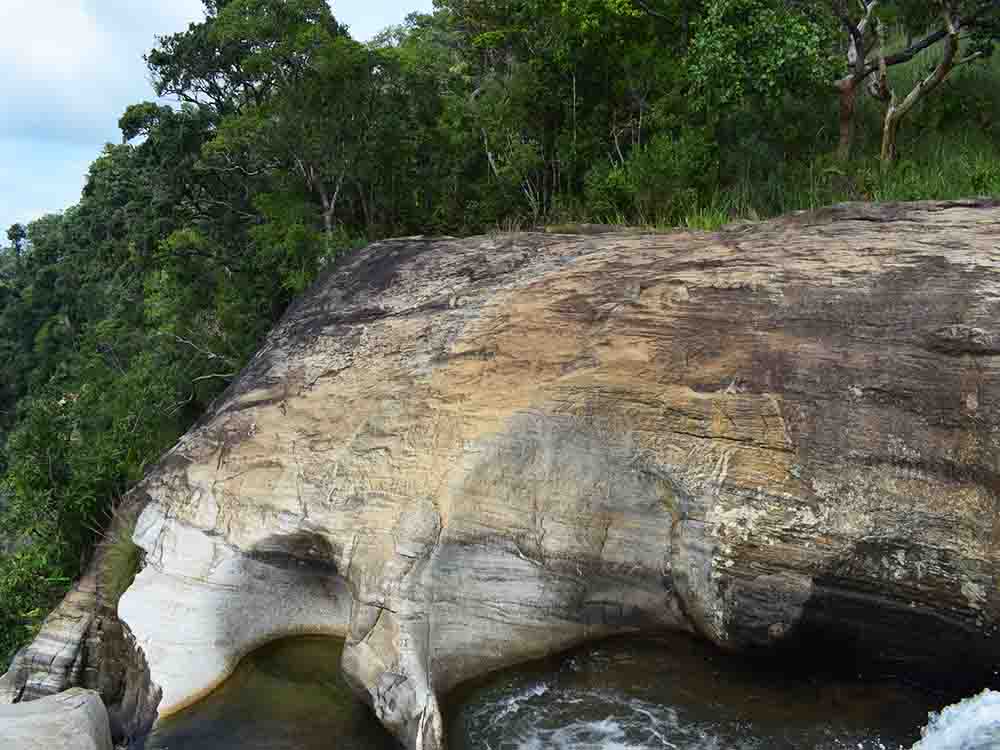 If you visit there during a rainy season, you have to pay extra attention to the slippery rocks on the top. Even though you get pictures from there, always keep someone in a reachable distance.

Due to the heavy wind, you may lose control and with a blink of an eye, you will be pushed away from the top. You can see the Poonagala village and the surrounding areas very clearly if it is not a cloudy day.

After enjoying the view of the underneath valleys, we started going back to Upper Diyaluma falls to have a bath. After finding a natural pool with a lower flow, we almost spend one hour in that clear cool water. 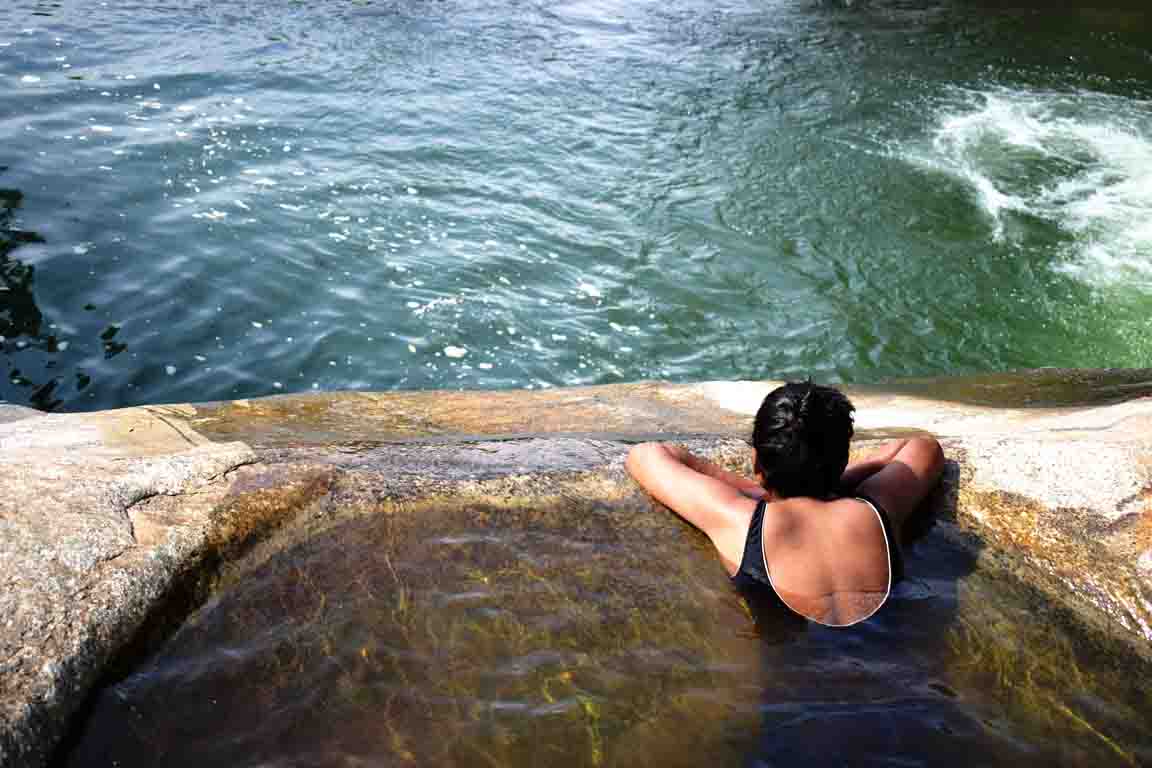 On top of the Diyaluma Falls

That is a really good reward for yourselves after the tremendous hike across bushes. But only that time I realized how much of bruises I had in my hands from the Grass leaves. 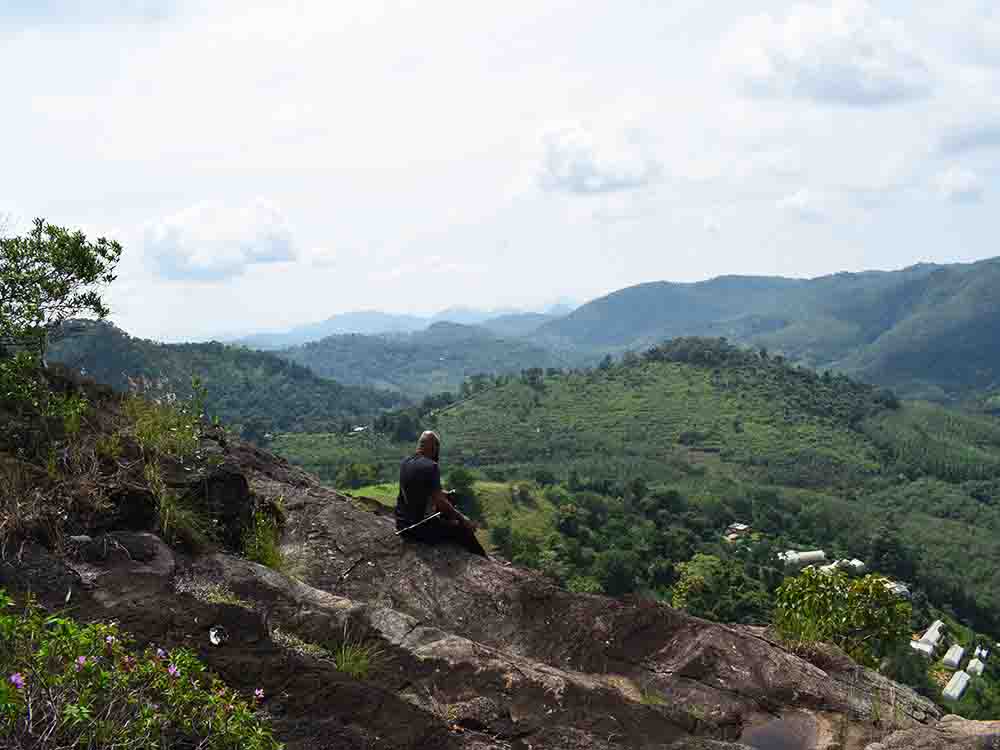 After the bath, we had some biscuits and milk packets since we couldn’t buy anything for lunch. It was almost around 2 PM when we started coming back to the summit point of the mountain to go back.

Since we were hungry, without spending much time on the way, we reached the estate gate within 45 minutes.

After having lunch, we got a bus from Koslanda to Haputhale town. From there we got a Colombo bus which was coming from Badulla. Since it was a Sunday it was too crowded. 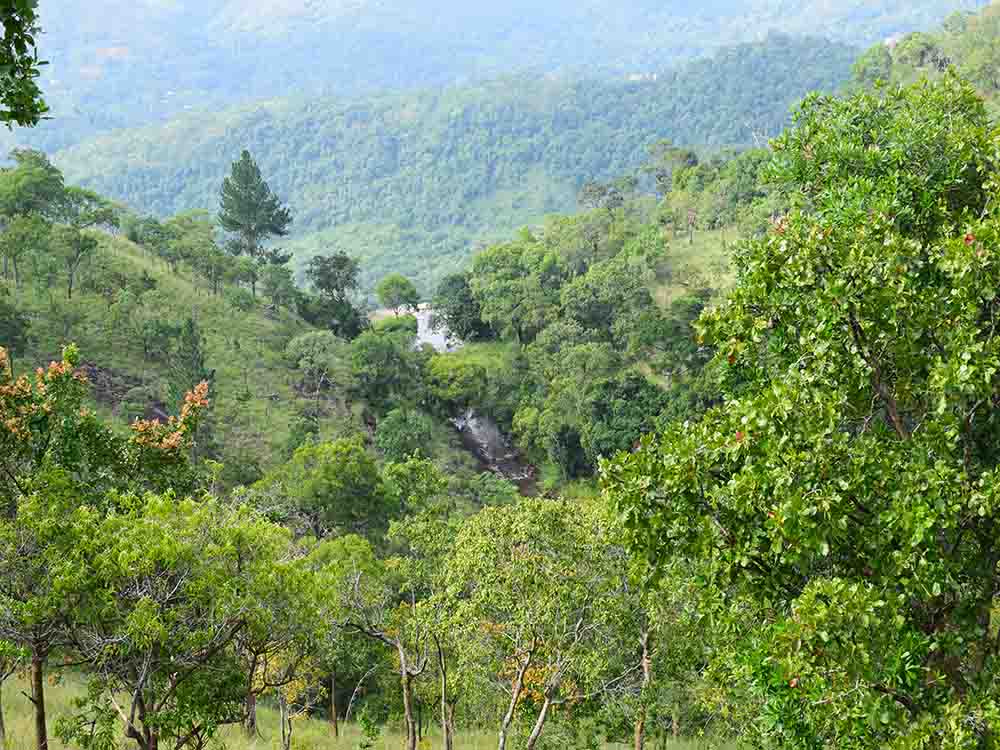 So we couldn’t get a seat until Balangoda. But we were not that tired, we were so happy to see those beautiful waterfalls. After spending a few long hours on the bus, finally we reached Maharagama around 8.30 PM.

It was all tiring hike with a marvelous viewpoint, so we went home with a lot of nice memories of Diyaluma falls.