Bambarakanda Waterfall is known as the highest waterfall in Sri Lanka. 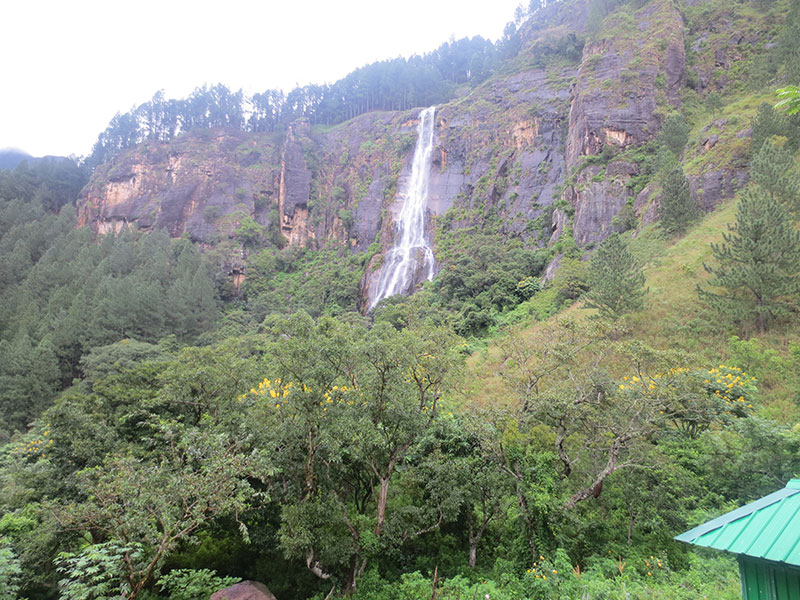 It is located in the Balangoda area between a few huge mountains. Once we had a long holiday, so we planned to go on a camping trip to the Top of Bambarakanda waterfall.

We started our journey from Pettah, getting a Badulla bus which runs through Balangoda. It was around 8.30 when we got the bus and around 11.30 we reached our destination, Kalupahana.

Once you get down from Kalupahana, you have to walk around two or three kilometers to the base of the waterfall.

If you are too lazy to walk, of course, there are few tuk-tuk guys. They will take you to the viewpoint of 300LKR.

walking down the woods was most enjoyable. Before the viewpoint, you meet the ticketing office. 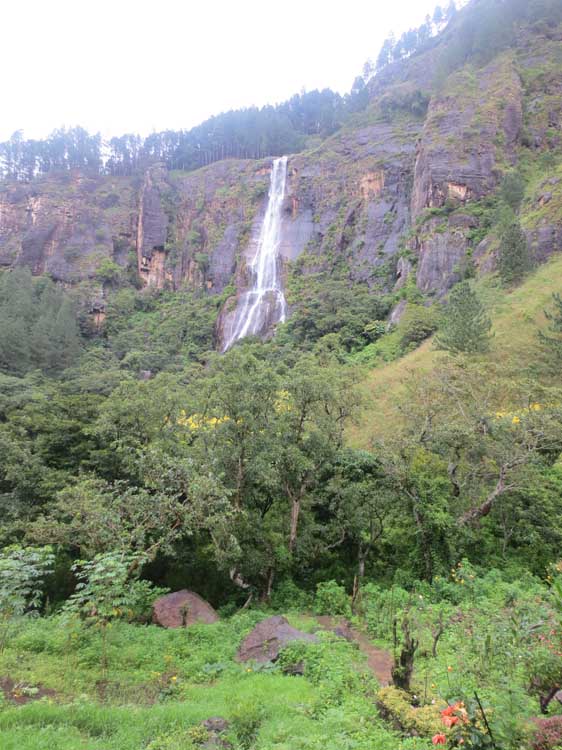 You have to buy a ticket from there to enter the viewpoint of Bambarakanda.

After buying tickets, we walked down the footpath along the Pinus forest to the waterfall.

But the basin of the bottom was full of water. so after checking with a caretaker at the viewpoint, we all got into the water and had a bath in that cold water after a tiring trek.

We were too hungry after getting a bath, so we had our lunch there. It was not too easy to have a proper lunch there with hundreds of monkeys. They were attacking us continuously until we offer some lunch packets for them.

So we walked across a huge grassland to reach the Lanka Ella. The pathway starts in the middle of the Pinus forest, it can be easily recognized with a Name board. 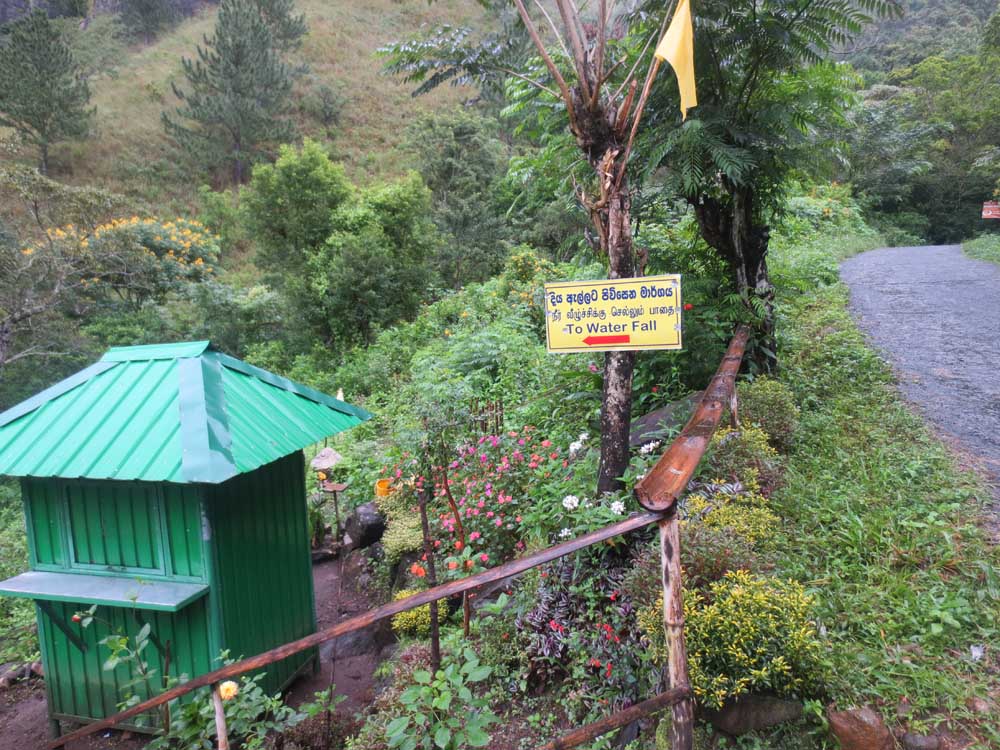 It’s called Lanka Ella, because of its shape of a teardrop because it looks like the shape of Sri Lanka. It has a big deep pool at the bottom. And it’s highly advised not to get into that pool at any cost.

So we relaxed a few minutes there and then realized there was a way to go up in the waterfall. We kept our backpacks on a side of the viewpoint and started climbing the path next to the waterfall.

It was very dangerous sometimes since there were no big trees to catch on even you feel like you are rolling down. Finally, after a huge struggle, we reached the top of Lanka Ella. 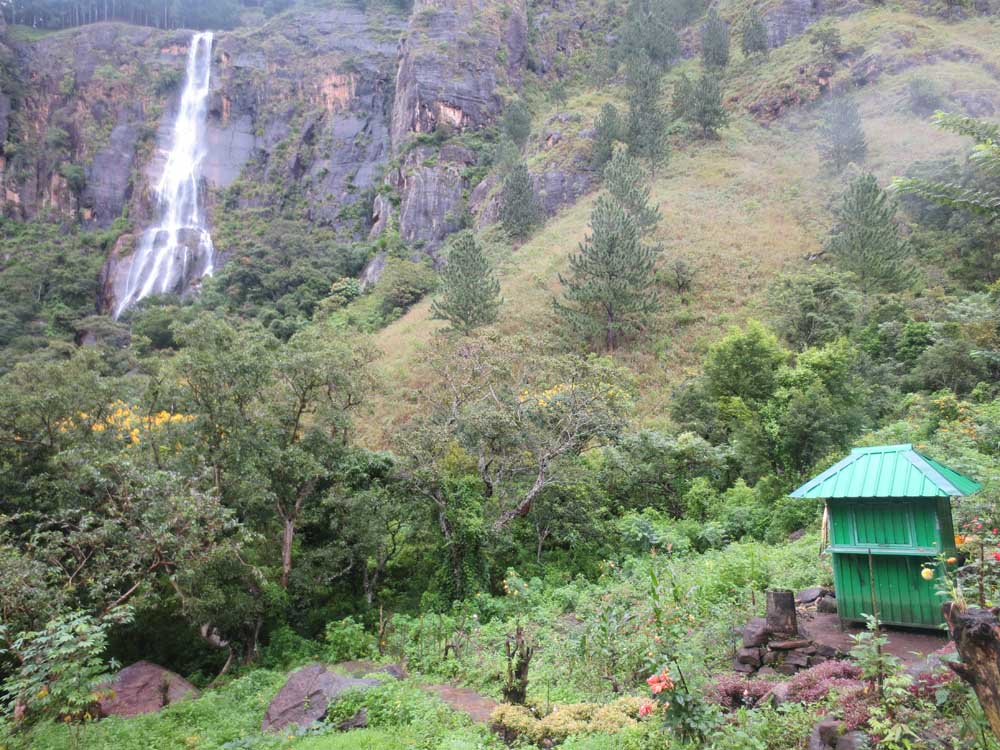 On the top of the waterfall, there are some mini waterfalls on the top where we could get a bath once again.

Those pools were not that deep and secured with rocks. Without a second thought again we got into the pool. the water was clear and clean, so once we finished bathing -we filled up our bottles as well.

Since it was getting dark at the time we came down the waterfall again, we hurried to the forest.

It was not too late, but with the mist, it was getting dark in the forest. It made us feel like we are in the middle of a horror movie. 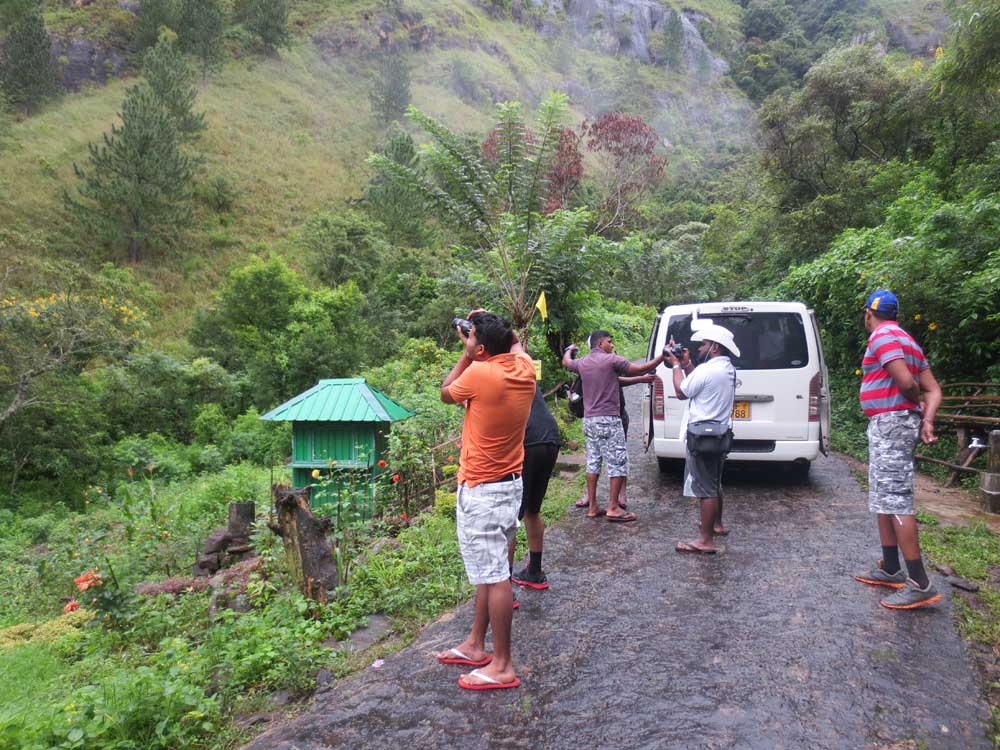 After climbing on the slippery road of the forest we reached the camping site of Bambarakanda waterfall.

Its a couple of metes away from the waterfall.

We managed to put two tents there and a few other tents in the other corner of the camping site.

Fire camp is a must of the camping events in hillsides of Sri Lanka to avoid the bone-freezing cold at night, Finally, we managed to have a bath in the poll for the third time in the day.

and later started cooking meals. (It was just a simple meal with noodles and some meatballs). 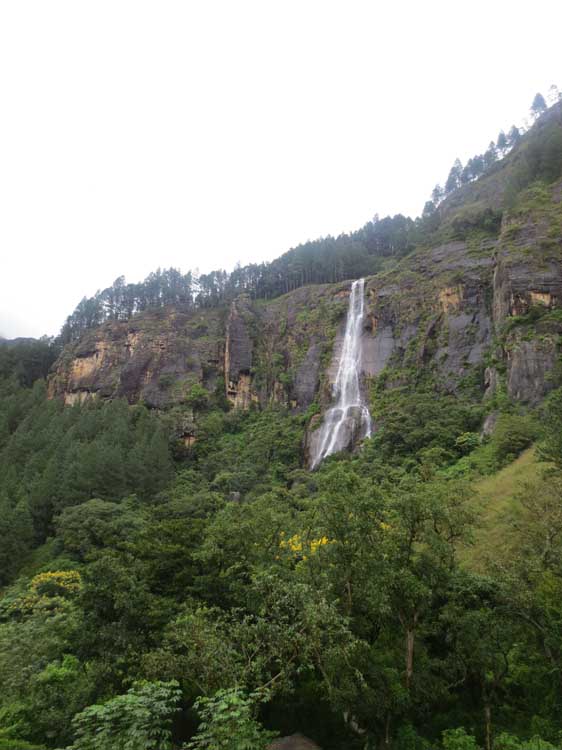 We bought meatball cans from a food city from Colombo and all we had to do is just heat it up from the campfire. We had a light dinner in the dark night and cold was freezing our bones.

Few of us were singing slowly around the campfire and suddenly it got cold it all, it was too cold to stay outside. so we spent half of the night staying next to the campfire burning woods all the way.

The next day morning we all woke up to see the sunrise among the hills and it was a magical sunrise and even forgot that it was cold in the morning for a while.

Golden sun rays were kissing the Pinus forest for a long time. 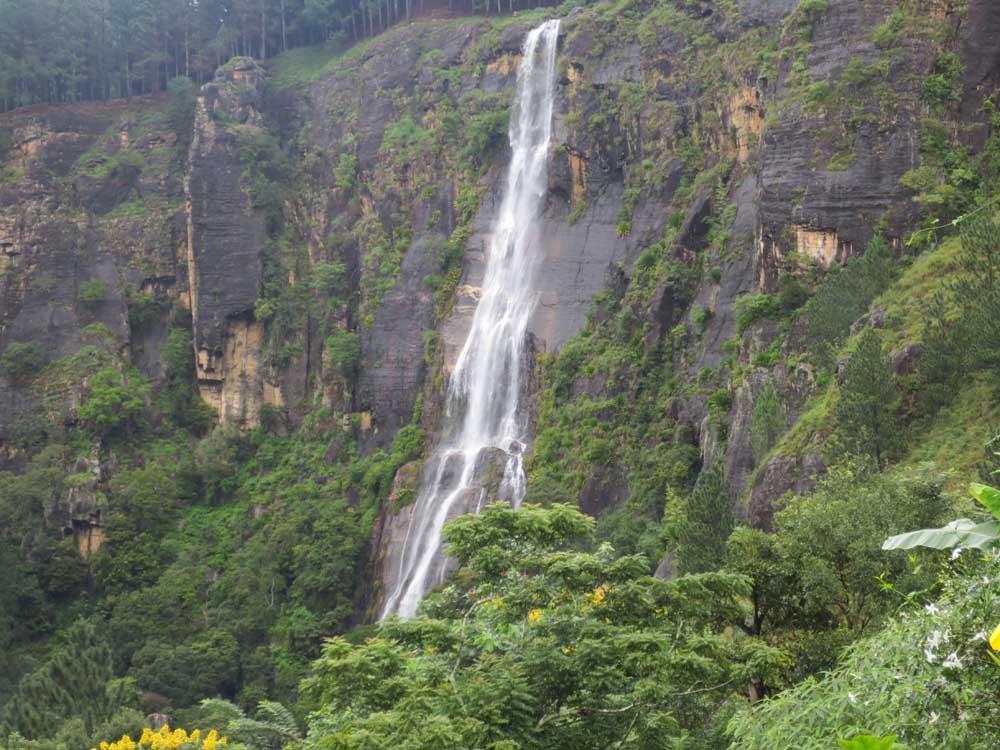 The morning was too cold in the woods and we ran into the waterfall to see the true beauty of the surroundings. It was a fascinating scenery of hills across the Sabaragamuwa region.

From one side we could see the Wangedigala mountain range. Since we were hungry we moved back to the campsite and had a meal with bread and a quick Dhall curry.

With the experience of camping for a long time, we had few expert chefs in the team to prepare meals very quickly yet tasty. we cleaned the campsite and got our backpacks done to come down to the road again.

everyone wanted to visit the waterfall once again, they mostly wanted to get a pic sitting on the top of the waterfall. I personally advise everyone not to take that risk if the water flow is heavy. 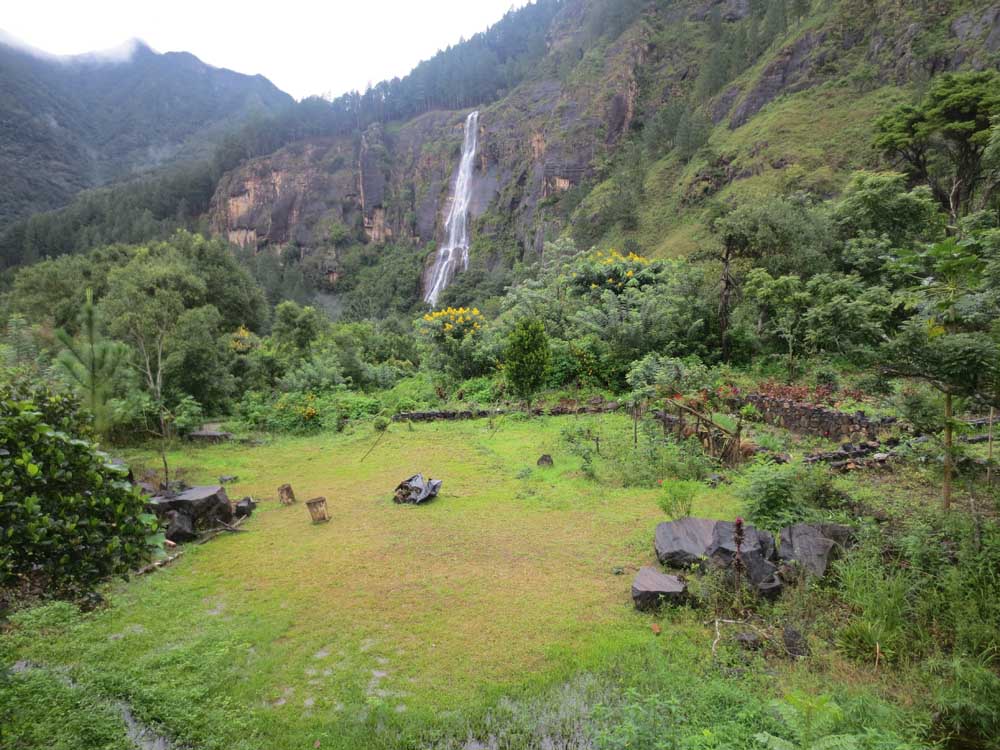 After spending some time on the top of Bambarakanda we started the journey down the Pinus forest to reach Kalupahana.

The road was too slippery with the Pinus leaves on the ground. So we had to be more careful while coming down with the bags on the back. After walking down and rolling down the Pinus forest we again reached the Bottom of the Bambarakanda waterfall.

finally, we made a trip, there was ample time to go back to Colombo so we decided to relax. 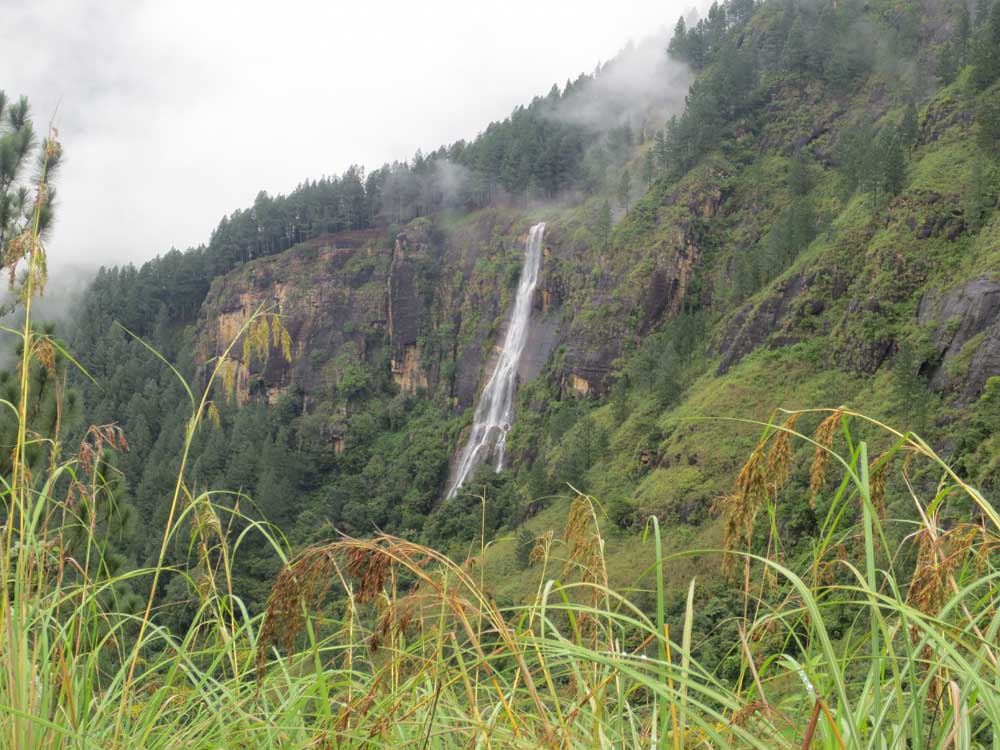 so many nice and adventurous memories this trip was the best.