Hanthana is known as one of the most popular hiking tracks in Sri Lanka.

It has seven peaks as the name of it. Since most of the Government University students use this track for their annual hiking sessions it’s much popular than others among the young generation in Sri Lanka. 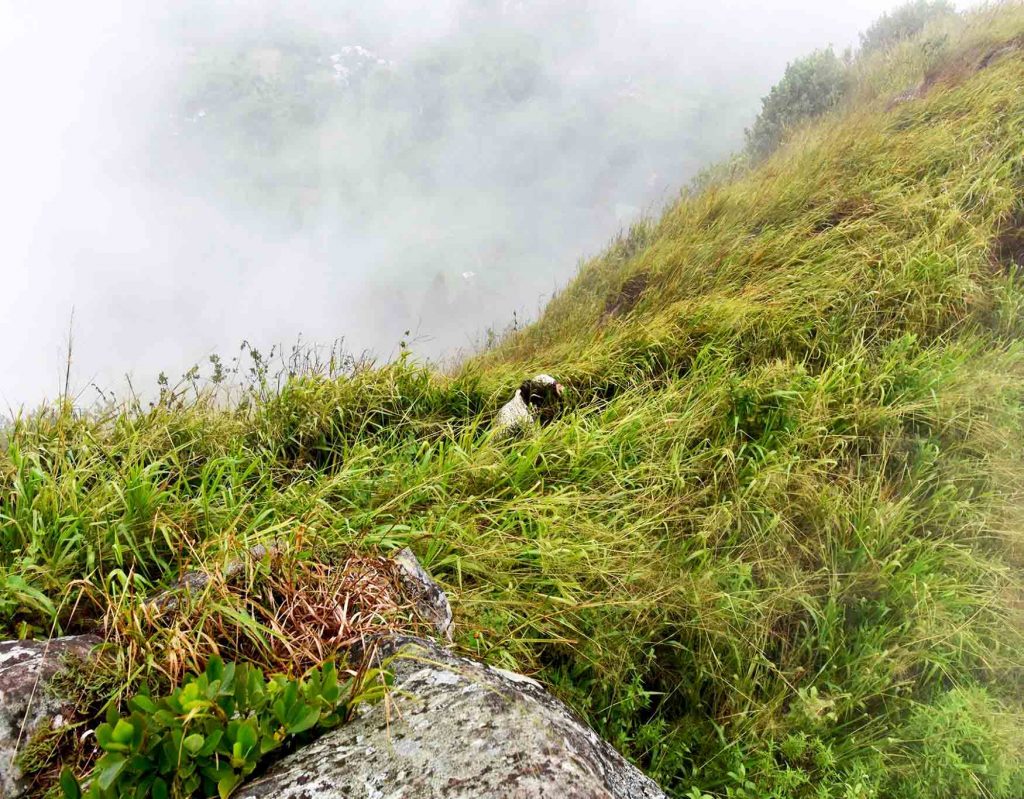 It was declared as an environmental protection area of Sri Lanka in 2010.

During the April holidays, we planned to climb the Hanthana mountain range, one of the most beautiful peaks in Sri Lanka. the Journey started from Fort Railway Station in the morning around 5.55 am.

Tickets were priced 100 LKR ( 1 USD). We arrived at Kandy Railway Station at 9.30 am. Few friends from the Peradeniya campus were waiting for us there to guide us through the journey.

There are few routes to climb the Hanthana Range.  We took the rout behind the old Bogambara Prison Road. This route was known as the easy way to climb up.

But we had no idea of the route we had to come down. 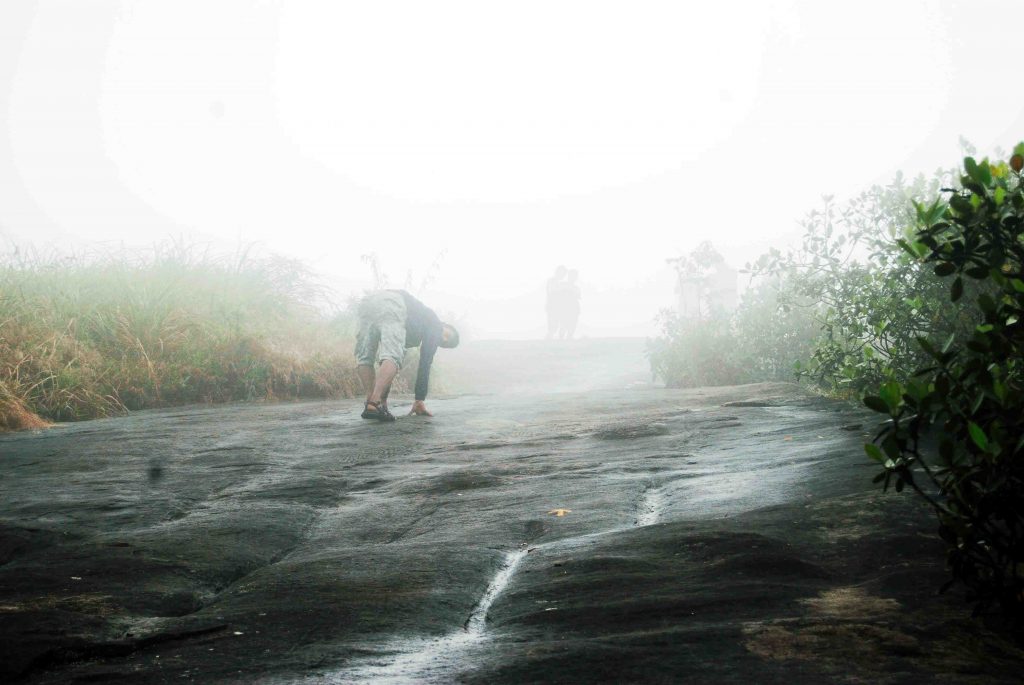 We walked to Prison Road and from there we had to get a tuk-tuk to reach the starting point of the hike.

It cost around 300 LKR to reach the Starting point. There is a bus service too, but we couldn’t find the timetable for buses.

Hallway the route, there is a Television tower on the top of the tea plantation land. So you can easily find the path from there.

It was still misty around the television tower even the time was almost 10.30 am.

Hanthana range has seven hilltops on the range. But you need more than one day to explore all seven summits in a row.

So it’s advised to visit there at your earliest to visit maximum peaks on one day. The highest peak is known as “Urrea Kanda”, which is 3800 ft. in height. We were able to reach the highest peak in our journey, but we could visit only three peaks out of seven.

Right after passing the tower at the end of the footpath, we came across the tea estate, we turned left to reach the first peak. 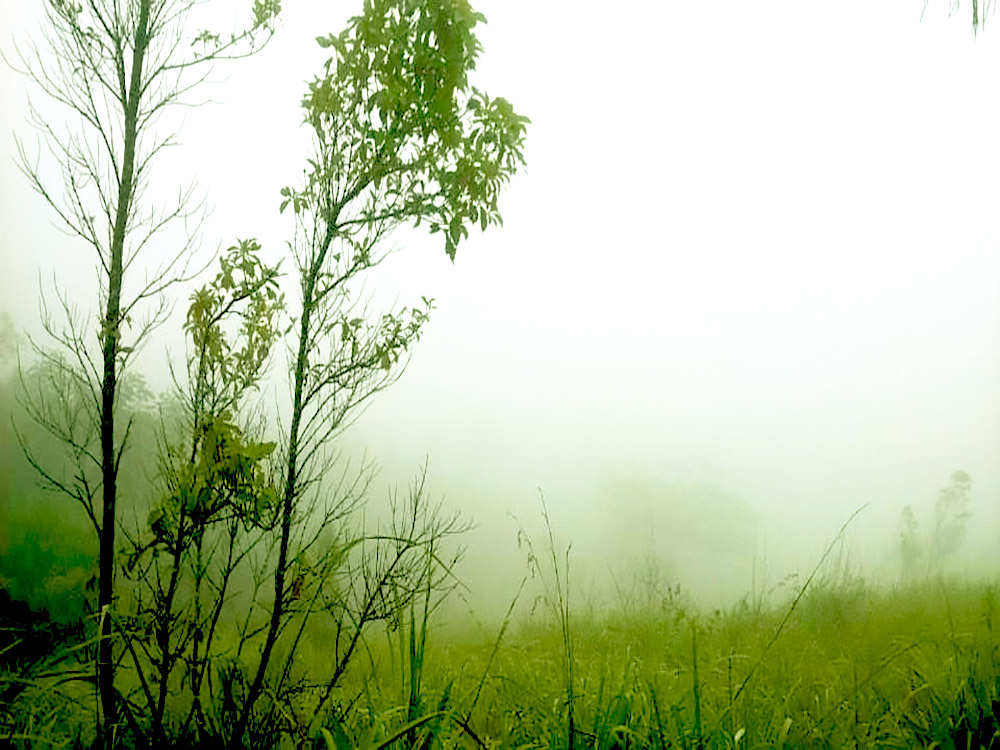 Trail was not that hard to climb. But thousands of leaches were trying to attack us. So that’s better to carry some leech repellents or wear leach protection if you visit Hanthana.

Sun was shining upon heads too hard by the noon while we reached to first peak of the Hanthana Range.

With the clear sky we were lucky enough to see the beauty of Kandy city from the first peak.

We had to walk another few meters to find a place to rest since it was too tired after reaching the first peak.

After resting under a shady tree we continued our walk to next peak of the Hanthana Mountain Range. Sky was full of clouds when we reach the second peak. So it was an early sign of rain in the evening. 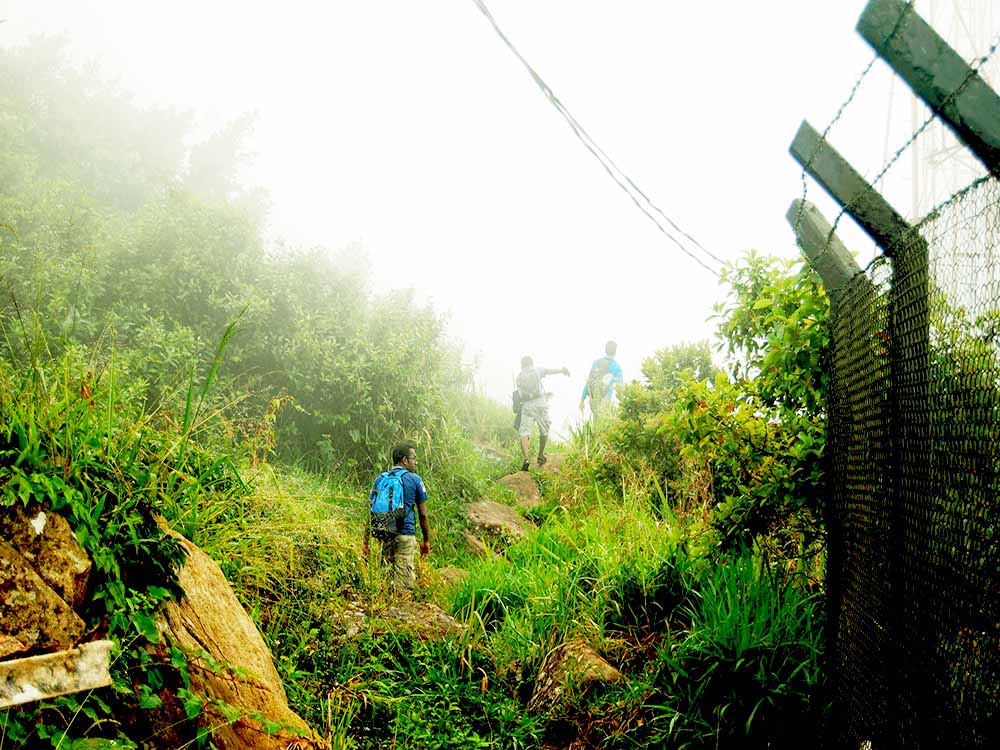 We were not able to see the view underneath us with the heavy mist. That made us reach the next peak without staying in the second peak. That was already too windy on the peak, so you have to be careful while passing edges.

In some areas, it is too hard to walk across the high grassland. Better to wear long sleeves and trousers to avoid bruises on skin made with grass. 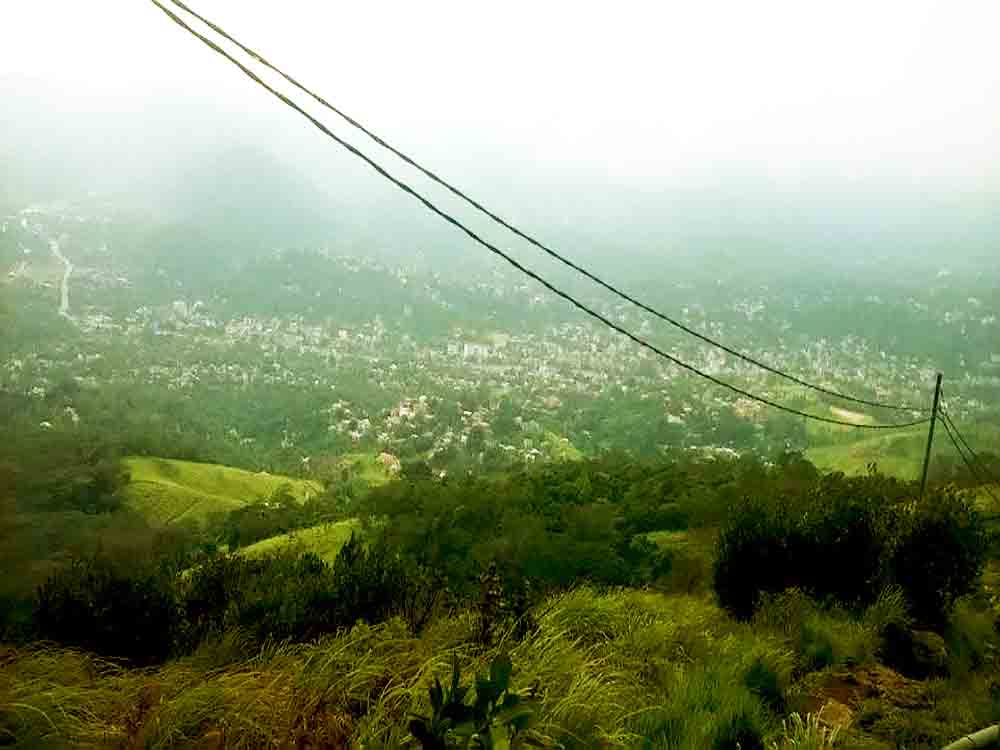 We continued to walk until we reach the next peak without staying anywhere. It was drizzling a bit while we reach there, so we had to move fast since it is not safe to stay on a peak while raining.

Third peak was a steep rock surface, where we had to be more careful with the slippery edges. But rain has stopped by the time we arrive the third peak. So we had some bread and “sini symbol “as we all were hungry.

It is always good to pack some snacks and biscuits on your way to Hanthana. But make sure that you take all the covers of plastic back to home, without leaving there.

After having food, we continued to the highest peak of the Hanthana Mountain Range. 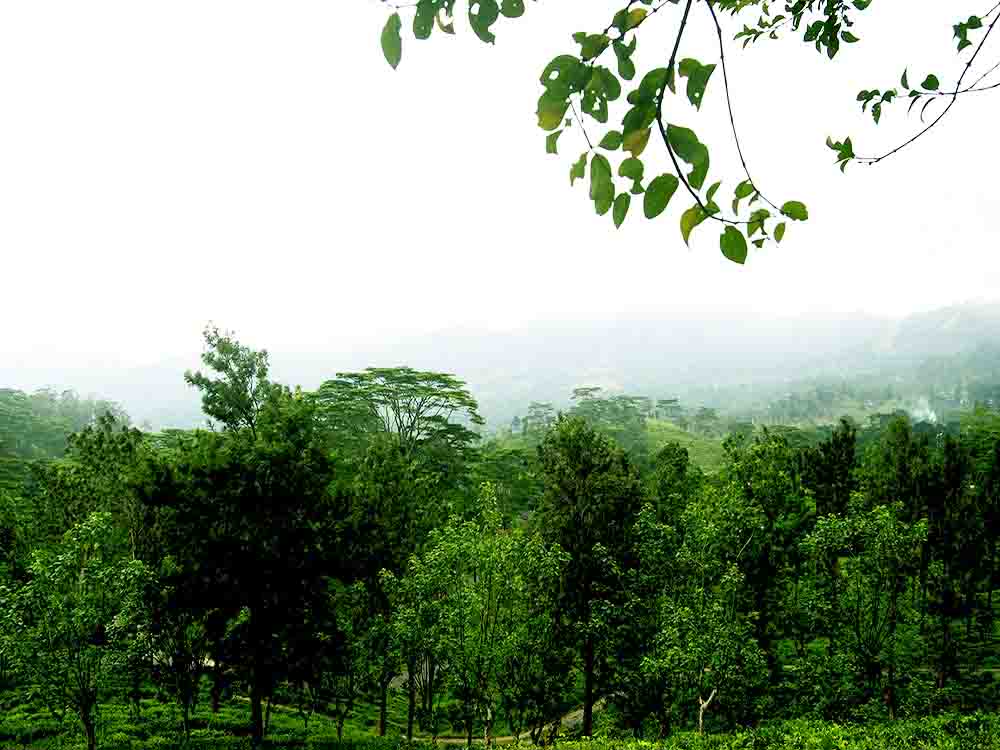 Sky was getting clear without clouds so we could enjoy the beautiful sceneries underneath. View of the Kandy town was really nice with the view of other mountains in the background.

We could easily see the Alagalla mountain Range and the Knuckles Mountain Range on the other side. We were amazed by the view underneath our feet. 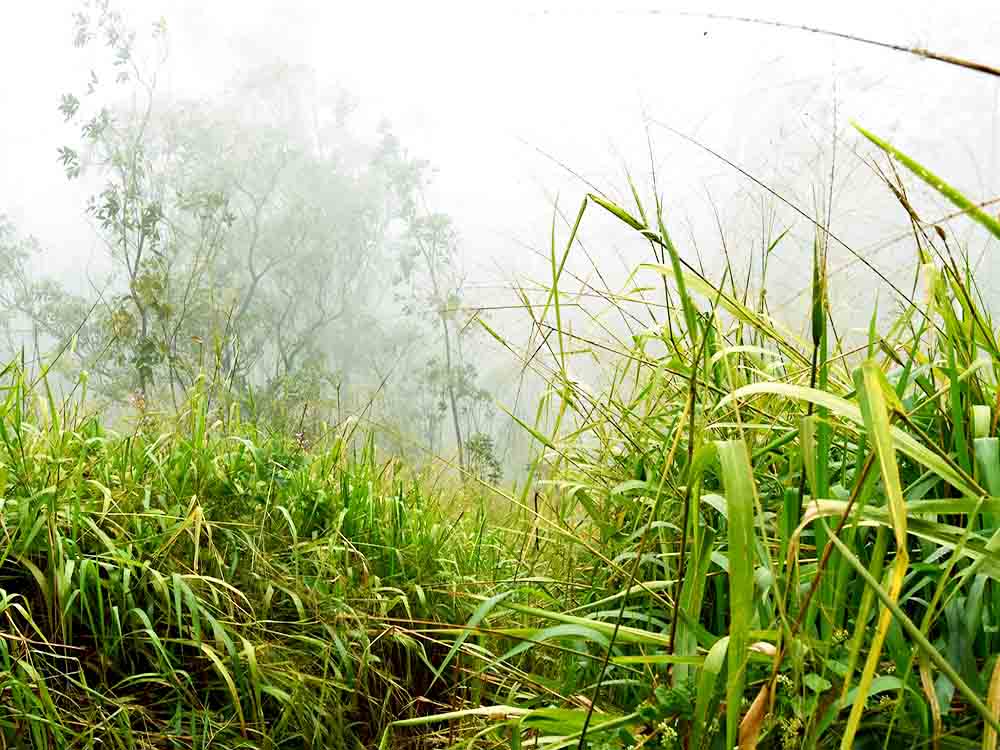 But we couldn’t enjoy it there for a long time with the rain again. So that’s better to have raincoats with you if you visit Hanthana. So we immediately ran to find the way to down without going to next peaks.

It is bit hard to find a way in Hanthana Mountain Range if you are lost. So it’s always advised to have a guide to hike since its getting covered in the mist by the evening. We were almost lost there for 30 minutes trying to find a footpath. 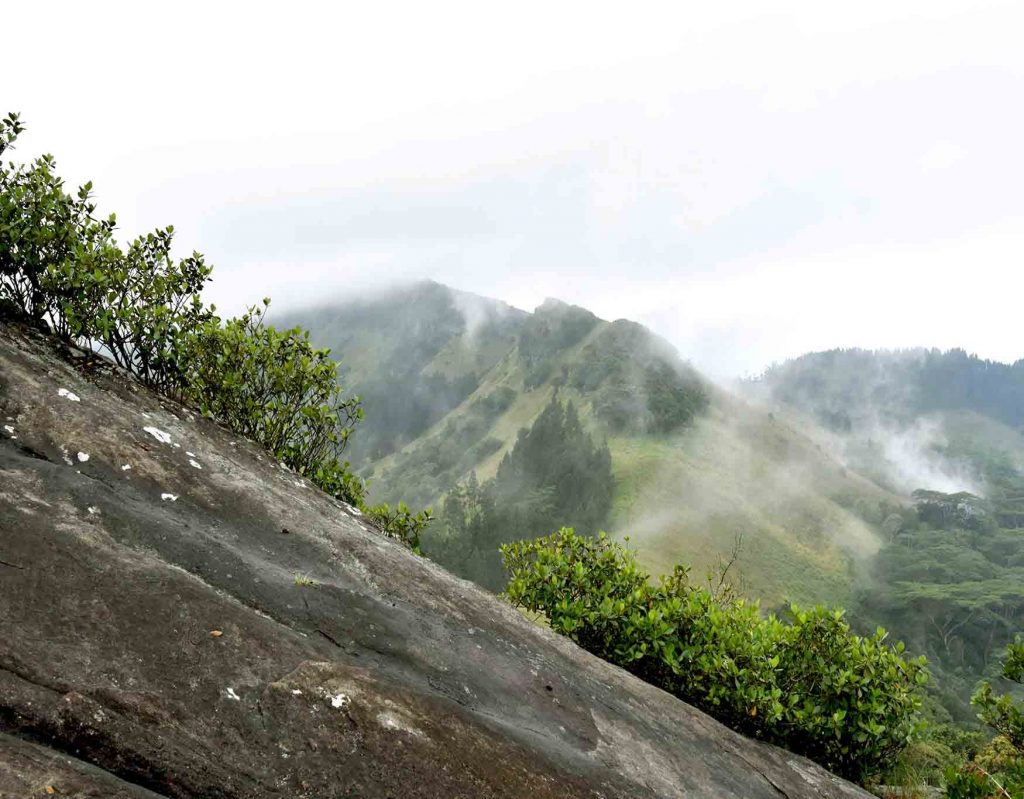 Luckily walking few meters from a steep rock surface we found a way to go home. But it was too slippery with the rain, so we had to be more careful.

That footpath was also too slippery and getting dark with the rain. Few of us had torches in our hands which were a great help at that moment. After walking down the footpath we entered a Temple.

We were really happy to find a way without getting lost. The rain was also stopped at that time. So we managed to have a little rest at the Temple.

It was already around 4.30 in the evening when we finally arrived at a proper road. That was the road to the popular Amaya Hills Hotel. From there we had to walk another 100 meters to get a bus to Kandy.

We were lucky enough to catch a bus to Kandy without wasting time there. 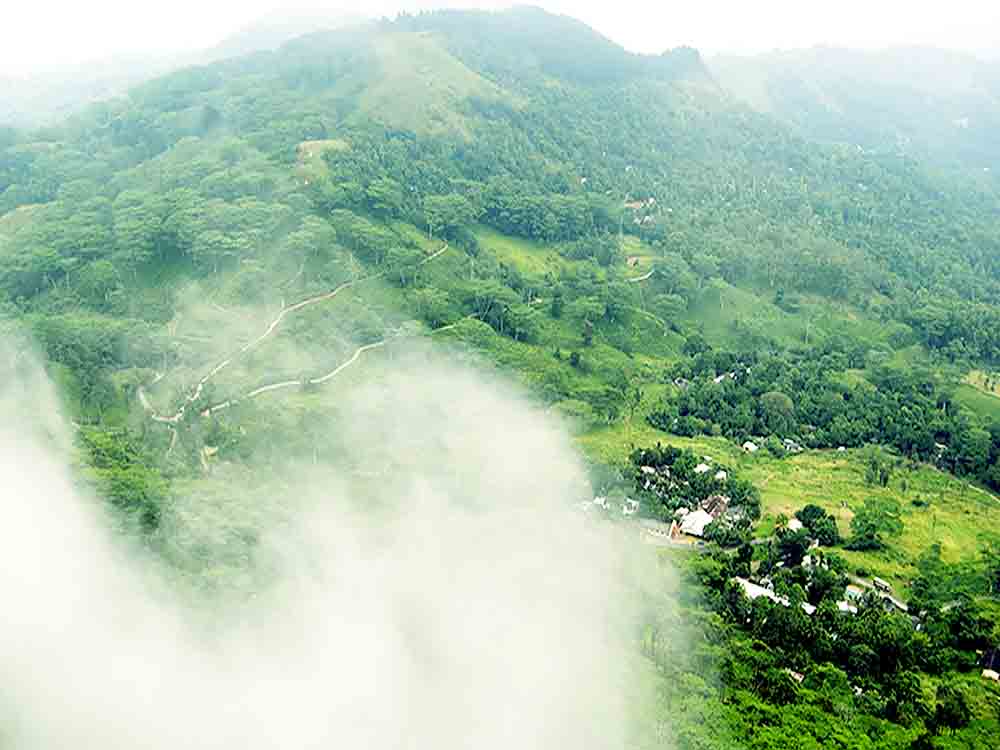 Around 5 PM we reached Kandy town. The first thing we did was going to a hotel and have a proper meal since we were too hungry.

From the bus stand, we got a bus to Kandy. Even though it was a tiring day, we have collected so much of nice memories